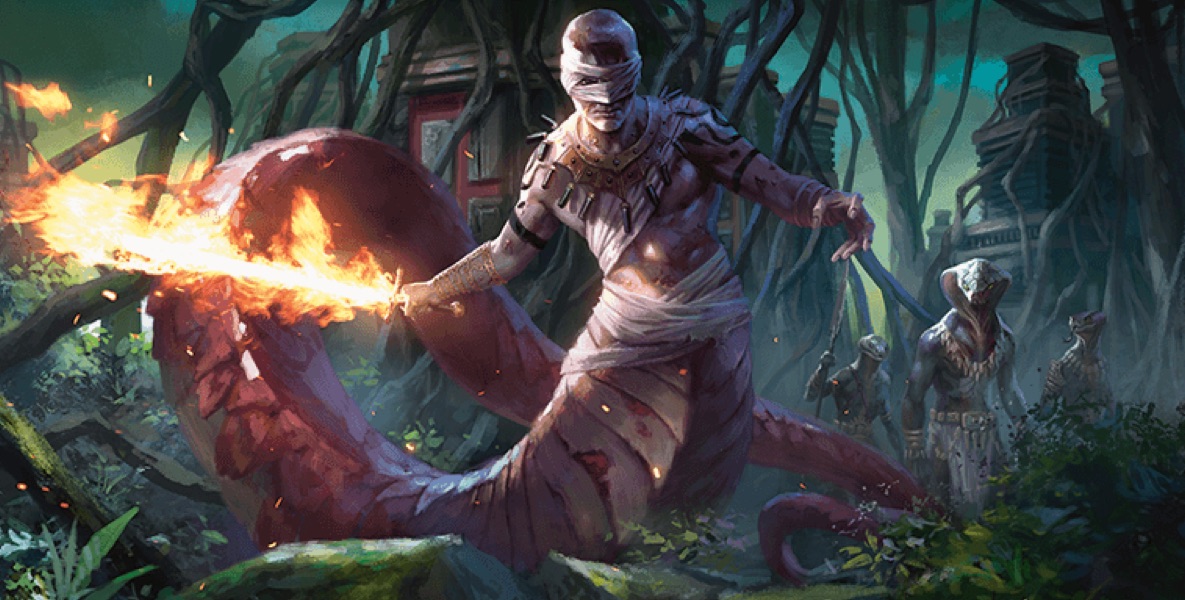 Spoiler Warning: This review will have major spoilers for Chapters 3 and 4 of Tomb of Annihilation.

The Tomb of Annihilation continues to be a fantastic experience. When last we left our players they were finishing up Chapter 2 of the book (see Part 1 of this review) which I modified to involve more of a puzzle. Since then, we have finished Chapters 3 and 4 and moved into the Tomb where they are currently crushing the puzzles. We’ve many more weeks of Gygaxian death traps ahead, but the players are doing their part to rid the Forgotten Realms of its particular global pandemic: the Death Curse. 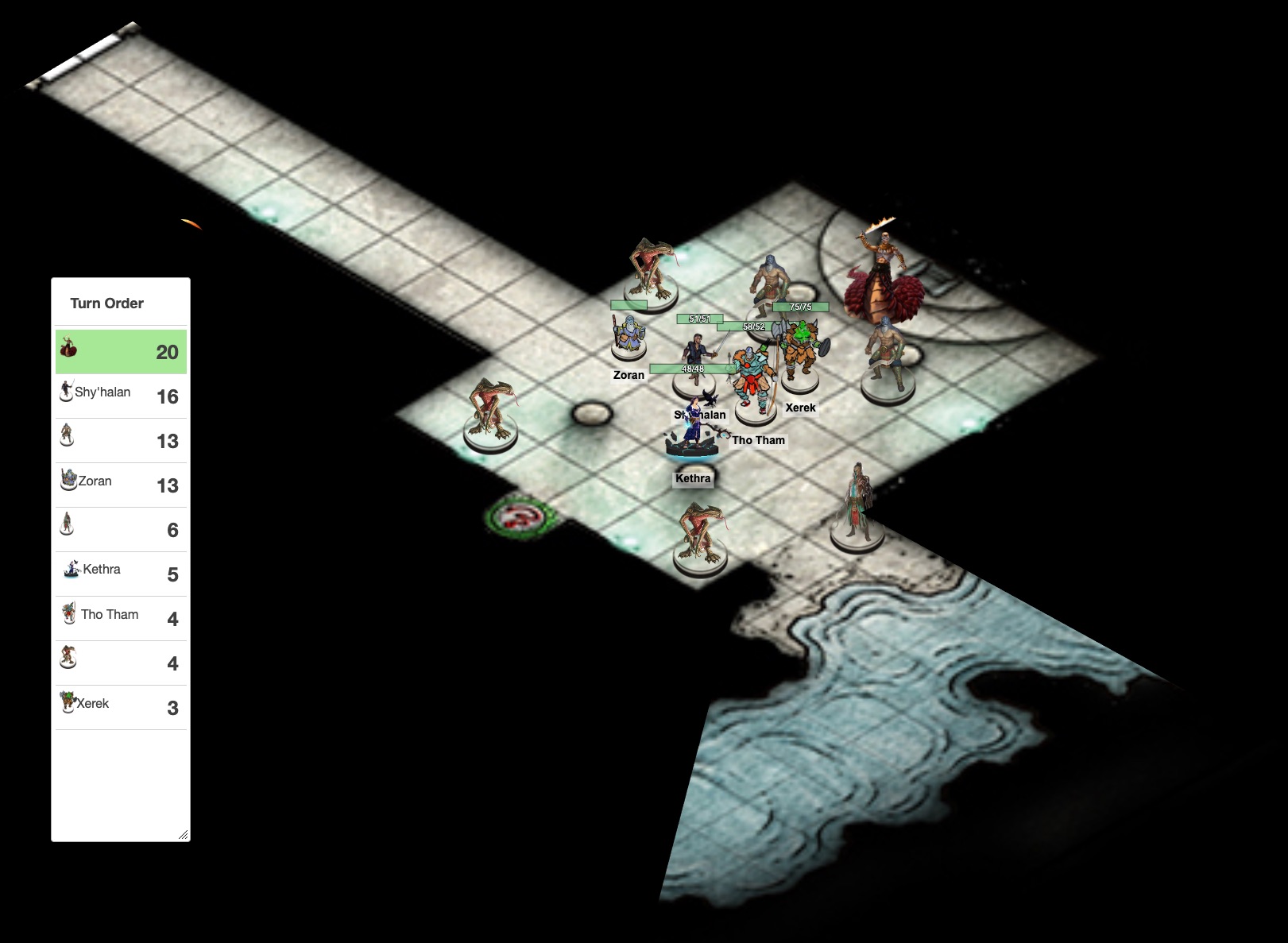 Game 28: Deep in the Fane, a cliff-hanger initiative roll

I previously made a big list of Pros and Cons covering the whole book in the first review, but here are additional impressions now that i have run Chapters 3 and 4. However, before we get to pros and cons, remember that by the time the players cross into Omu and the Tomb you’ll need to have revealed certain plot items to keep them focused and motivated to move into such a dangerous dungeon.

Whether it is a plot element or just a tutorial fight of how the table will rule on a more complex mechanic in D&D, get organized and make sure you drop all the clues and experiences they’ll need to understand most of what later chapters in Tomb have to offer. Here was my list:

The Tomb has death traps and difficult enemies which will seem unfair to players if they were unaware of a mechanics. They’ll engage more tactically with Tomb challenges if they know how you interpret the D&D rules ahead of time, even if it means coming to terms with your house rules or house interpretations. Mechanically, also remember to establish the following:

Additional Pros: Why I love this adventure

Omu allows the players to transition

The Tomb, Chapter 5, is a massive departure from the wide-open freedom of the early jungle. The players are locked inside for several levels of adventuring with no hope of escape except by defeating the boss battles. Omu and the Fane gradually restrict the players’ movement and choices from an open hex crawl to a narrow fight for their lives against an entire city of enemies.

Omu is a chance for a simulationist sandbox

Simulation is a less common play style in D&D 5e to which Omu can be used as a good introduction. The city has multiple factions and threats that will react to the players’ actions. Treat Omu and its factions as a petri-dish where each intelligent group will make moves and maneuvers based on their knowledge and motivations. Consider keeping a “threat” sheet for each faction and before each session ask yourself if that threat has advanced to the point where it will start to impact the party proactively rather than passively sitting back waiting for the players to initiate every move.

Tip: The King of Feathers is an apex predator. I gave him a random chance to be asleep when encountered in the colosseum and my players lucked out and skipped his encounter until forced into it later by the Yuan-Ti.

Additionally, Omu is effectively a hex-crawl without a hex grid. Each building and intersection is an opportunity for an encounter an exploration and each named building can trigger an event and jump to the shrine map.

Game 25: Omu is effectively another hex-crawl, just with building-by-building exploration.

Tip: give your players the entire player’s map of Omu the moment they stand at a cliff or entrance to Omu. Let them know that they’ll need to search the city for clues to lead them to the Soul Monger, or the Tomb if they’ve uncovered that bit of knowledge already. Aside from the massive palace in the center of the city, which has obvious Yuan-Ti activity, don’t give them any more information. Treat the map like a Where’s Waldo illustration they should scour with their actual eyes. Every house they see is an actual house. Don’t mention the obelisk entrance to the tomb unless they spot it! 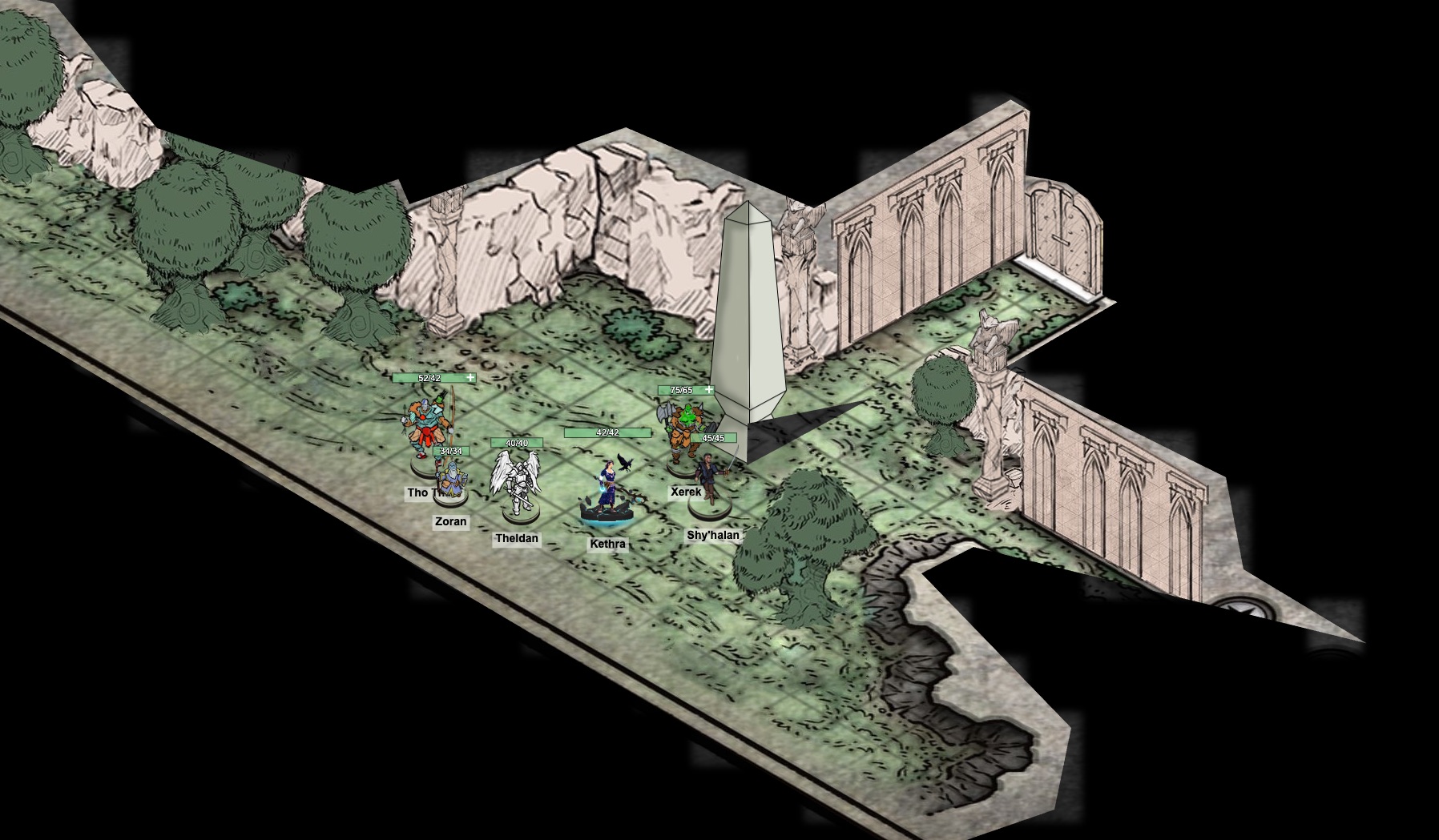 Game 25: At last the entrance to the Tomb of Annihilation.

Omu is full of suspense

The players will need to hide if they expect to dodge patrols and retain their freedom from the slave-taking Yuan-ti. They way they explore the city, and their general level of caution will impact how Chapter 3 goes. Some groups may be captured almost immediately. Others may not enter through the obvious city entrance and completely avoid detection for days. Either way, make it clear how outnumbered the players are in this populated city. 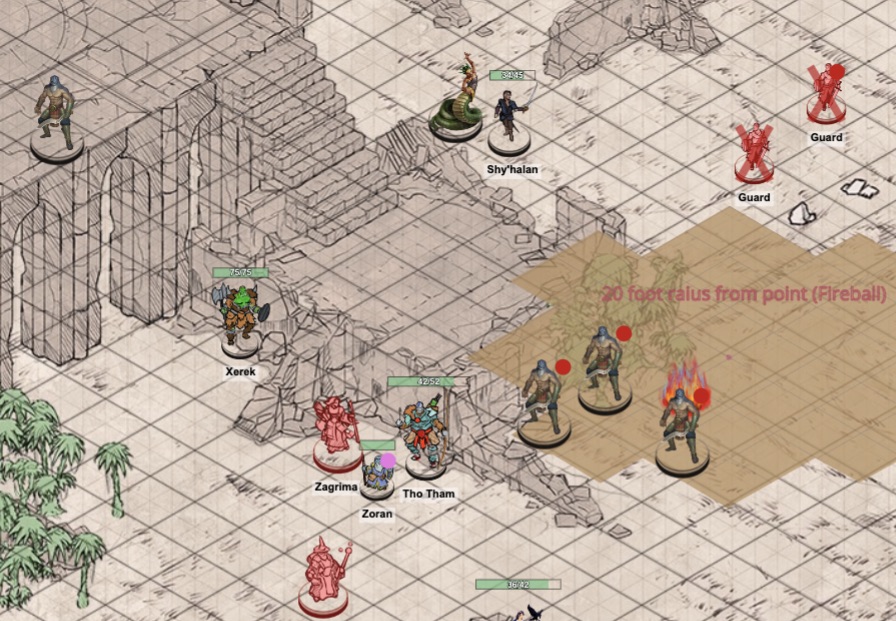 Tip: Foreshadow the Tomb every chance you get. Drop clues from the Yellow Banner adventurers to make it clear there is a Tomb in the city. Put references in abandoned Chultan libraries and government buildings. Give the players dream sequences from the Sewn Sisters or even the overwhelming evil of Acererak and the Soul Monger. My players entered through the waterfall, and the vision recommended by the book was excellent.

The pace of Omu is easy to control

The moment that players seem to be bored of puzzles, you can have Ras Nsi start to take them more seriously and visibly grab all remaining cubes. Suddenly, whether by pacing or advancing in level, the players can enter Chapter 4 with momentum. 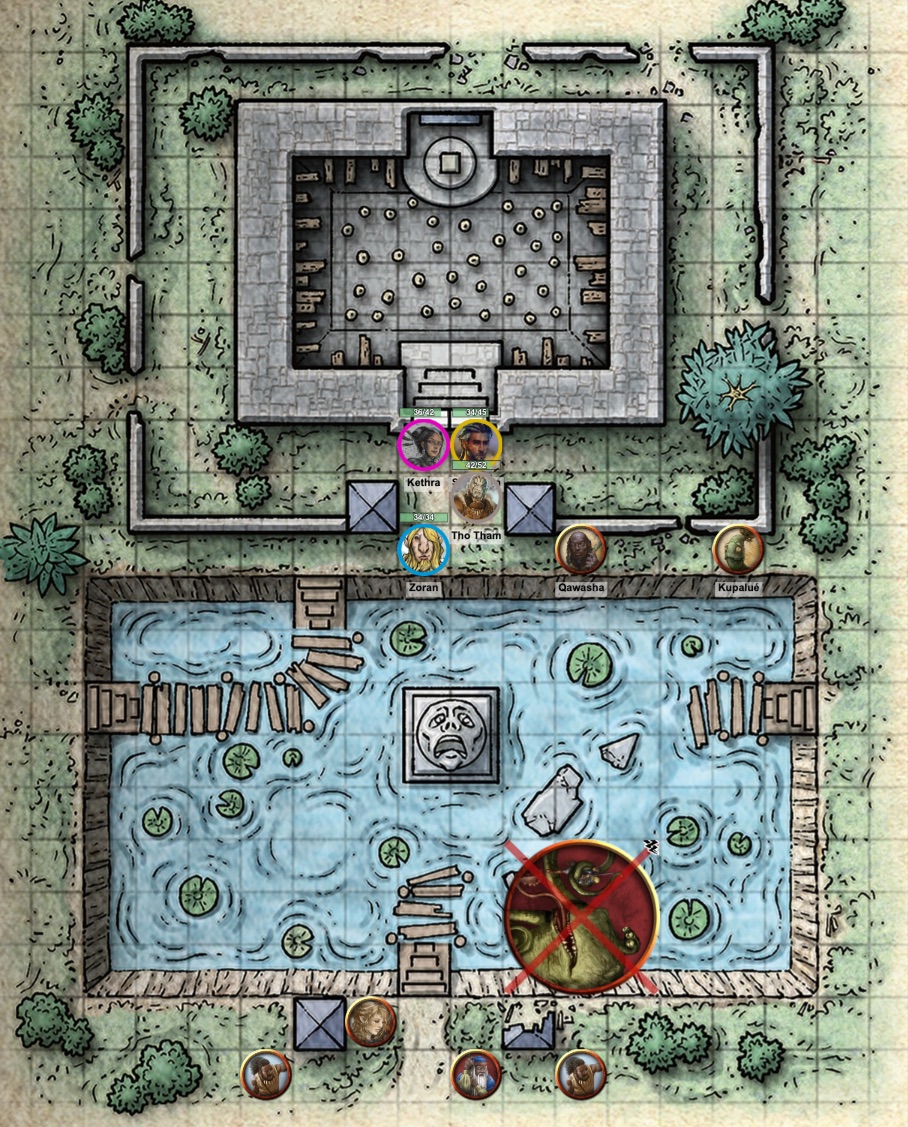 Game 26: You don't have to do all of these if the players aren't into it. 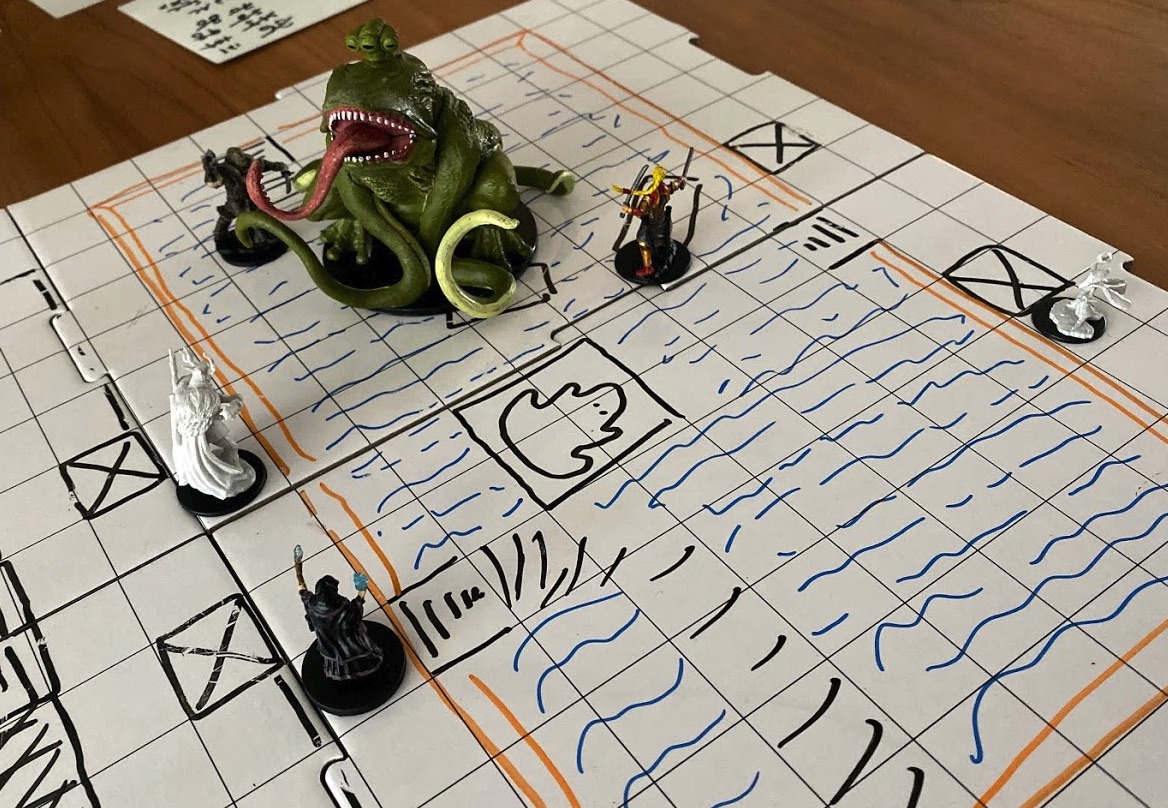 Game 26: Prepping the same fight with minis, because I can.

Tip: the Red Wizards make an excellent 3rd faction to make a set-piece battle against the Yuan-Ti seem more like an open-ended story for the players to explore. The Red Wizards are evil and untrustworthy, but their numbers are so low they’ll need to compromise and work with the players. Let this go anyway, including having the players betrayed, if that is the consequence that their actions dictate.

Tip: Whether digitally or using pen and paper, get a player’s view map of the city and encourage them to annotate it so they remember what they have and have not searched already.

With creativity, the Fane is an excellent challenge

I’ll be honest, I was expecting not to like the Fane. There is a simple political device inside the Fane’s leadership to exploit, but with multiple entrances, powerful monsters, and overwhelming numbers, the dungeon will need to be dealt with smartly. The Fane reminded me of my favorite moments from 2nd Edition where Dark Sun would put players against impossible situations and just expect them to figure something clever out. Attempts to clear the Fane room to room should end in humility and capture for the party. Prisoners should have geas spells cast on them to secure their bondage. The Fane can act as an out of game life-lesson that D&D players that some challenges can’t be solved with combat and mechanical theory-crafting is not the only way to use one’s intelligence and creativity while playing D&D. 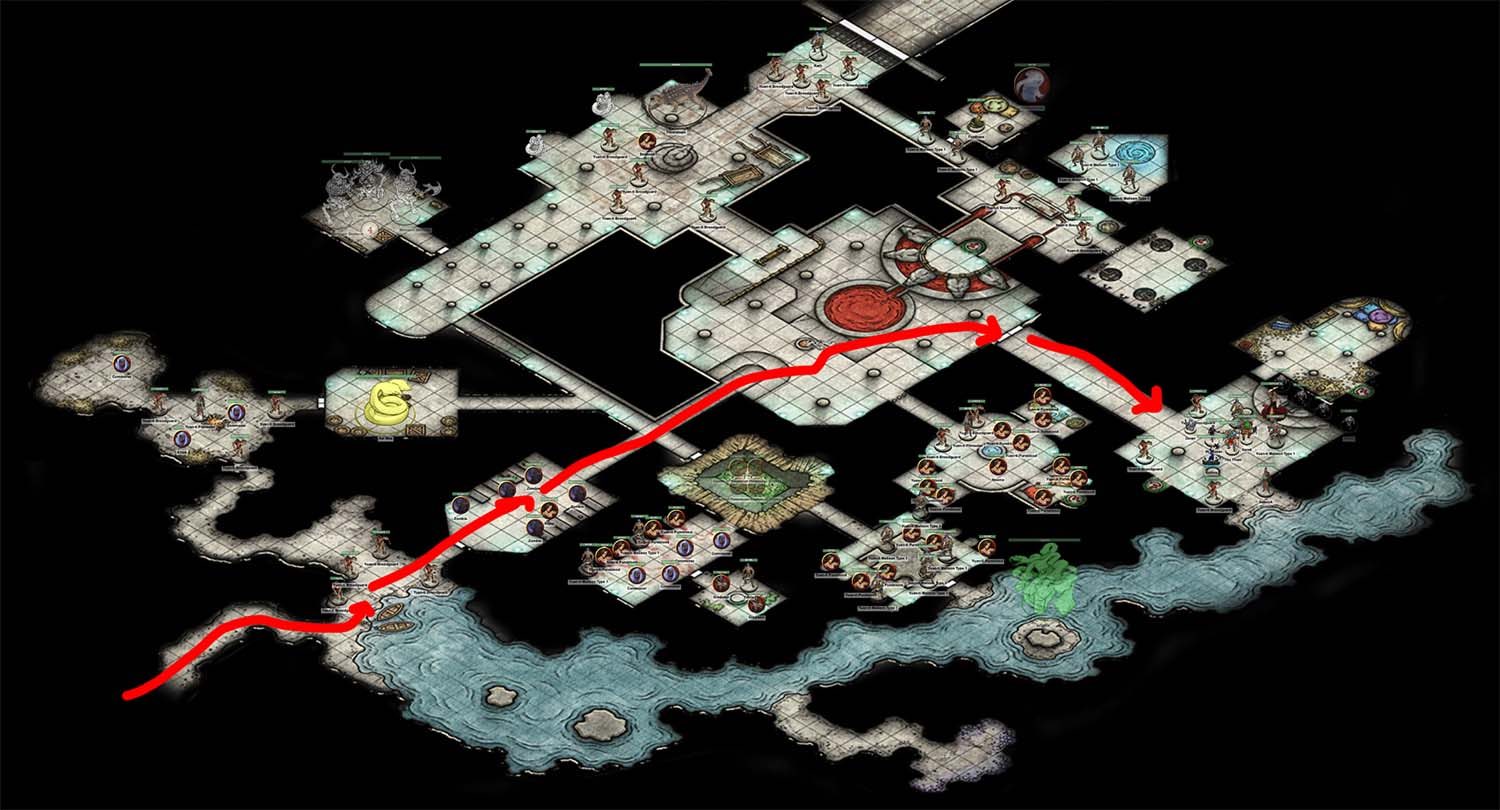 Game 28: My party infiltrated from the back entrance disguised as Yuan-Ti and quite simply lucked out finding Ras Nsi's throne room right away.

Tip: Aside from suggesting that Zagrima knew a powerful mass-polymorph ritual, I left it options for infiltrating up to the player’s invention. Make sure you give them some bread crumbs to follow if you know they are naturally over-cautious. They may need a nudge in the right direction and your help understanding that just hanging out in Omu isn’t a safe option.

In my game the fight against Ras Nsi was memorable because the players ran almost out of resources and had to escape a completely alerted fane. Here’s a fast foward video of my party’s encounter:

The King of Feathers is underpowered

At sixth or seventh level, the King is an easy anti-climactic fight on his own unless you give him significant allies. My recommendation is to carefully time the King of Feathers fight so that the players have already used some of their resources. I made him a semi-mystical force of nature, a past vessel of Ubtao representing uncaged nature. I gave him misty-step as a bonus action and extra hit points. He was my party’s last encounter of Chapter 4 after a long day which included the entire Fane. Do not let your players encounter him after a long rest, it will spoil the fun. Here’s a fast forward video of my group fighting him at the tomb entrance:

Some threats in Omu are underdeveloped

The kobolds, vegepygmies, grung, and above ground sections of Fane are not well described or detailed in the book. Many DMs improvising that content will likely create dry scenarios that could take place anywhere in D&D rather than being particularly fitting of this module or Omu. I would have appreciated a much larger list of random Omu abandoned building encounters.

Heavy-handed push to the Fane

As written, the PCs have few ways of really knowing that Ras Nsi has the last cube. The book doesn’t give DMs enough tips or hooks to gracefully encourage their players to get it from him. DMs are suggested some pretty heavy-handed ways to push the players into Fane and I see many of them, like volunteering for slavery, as unrealistic for your average D&D party.

How to follow my group’s Isometric run through the Tomb:

Thanks for reading. Stay tuned for my final review of Chapter 5 or follow along week by week as I release more FFWD videos (playlist) by subscribing to my Youtube channel.