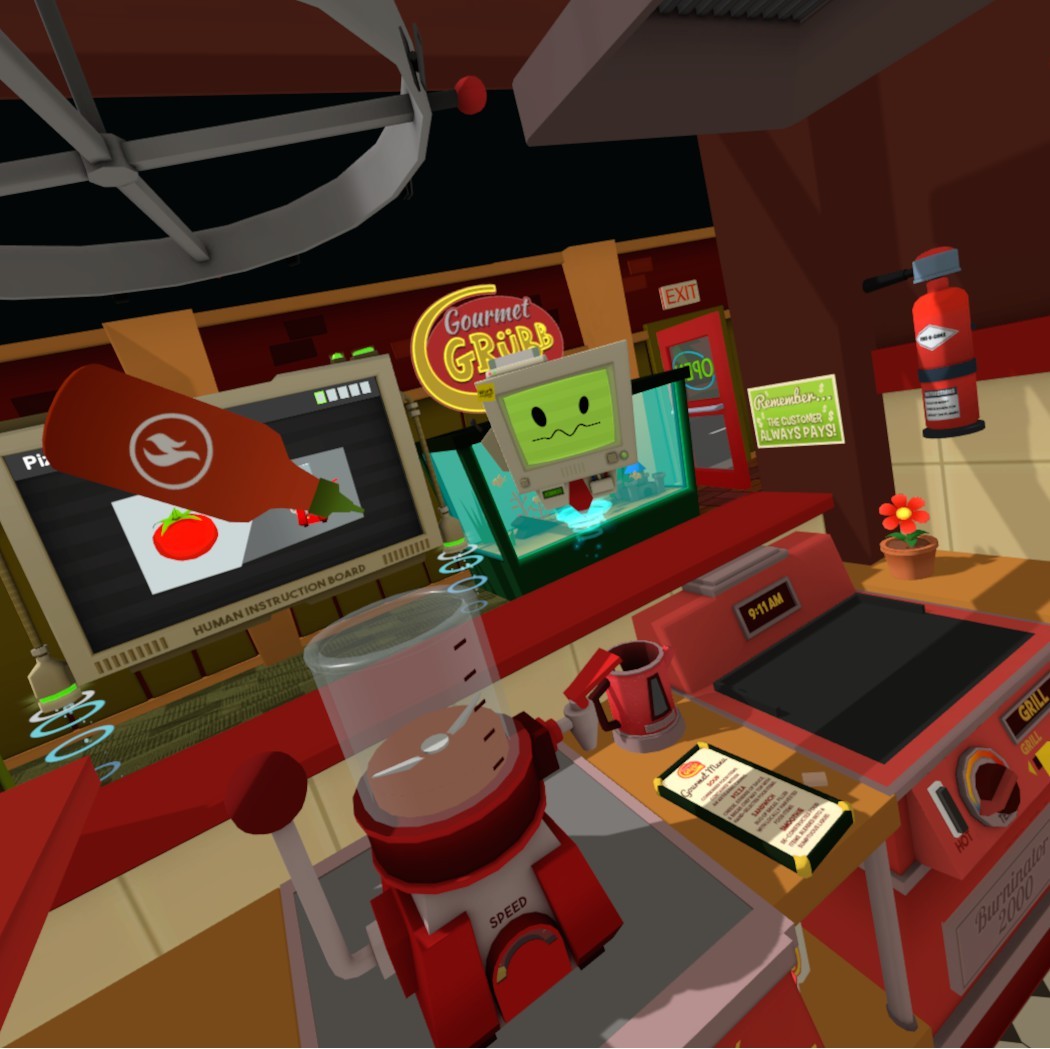 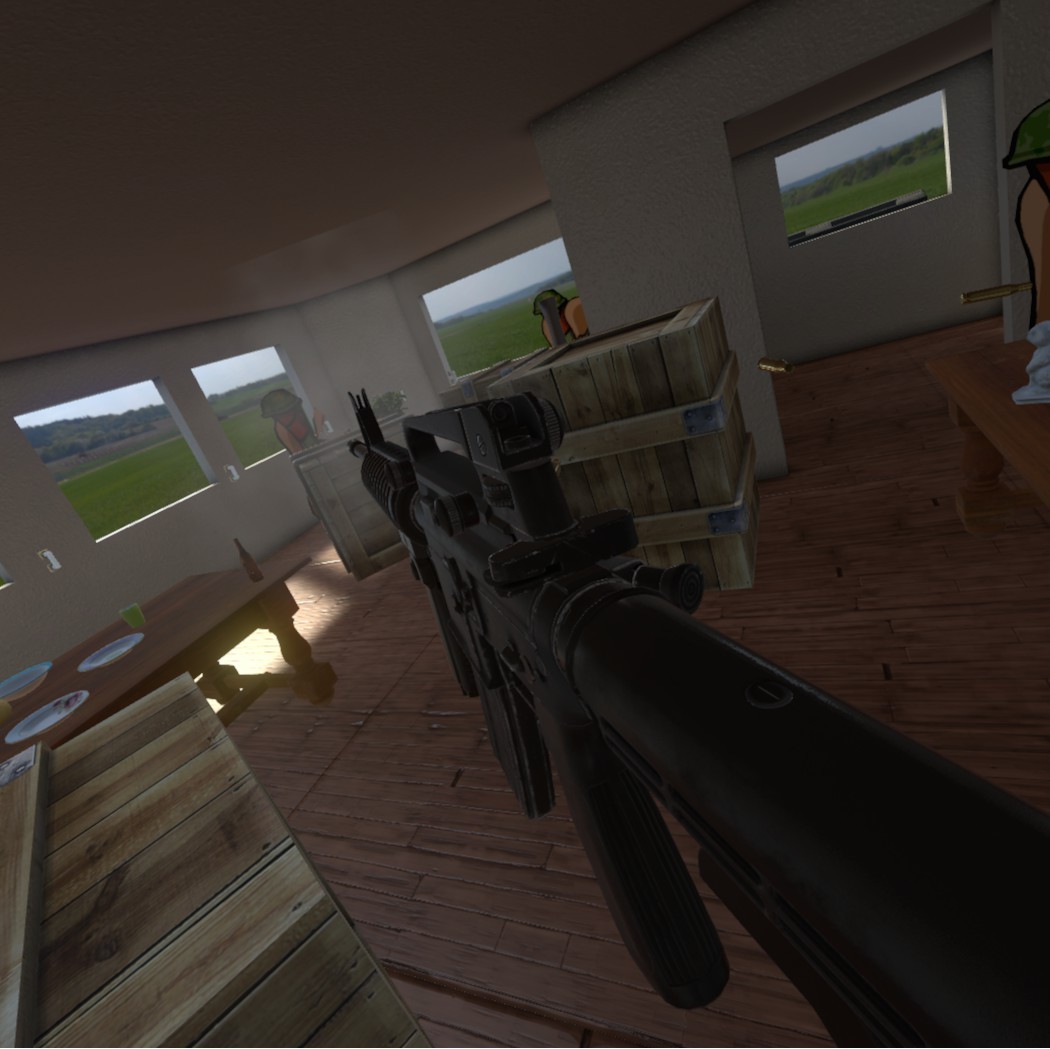 I’m a few weeks into VR at this point, having ordered a new PC gaming rig to go with it. This is very much a medium under active exploration. Developers are figuring out what works and what doesn’t by experimenting and putting out innovative but incomplete experiences. Some quick notes thus far.

Hardware: From a configuration and setup experience, the Vive is fine. Attaching the base stations to the walls of a dedicated room in a large home is out of the question, so I’ve got them on two amazon essentials tripods, which get rearranged depending on which area of my apartment I’m setting up in. This of course means I have to leave a monitor, keyboard, and mouse attached to the rig as the Vive room calibration software has to receive actual mouse input. The in-VR chaperone that puts up a wire mesh to warn you when you are getting close to a wall in the real world is fantastic.

Room Size: I play in a 9′ by 6′ space, which has been just fine for any game requiring room scale. As long as there is a teleport mechanic I haven’t felt constrained. Some games that require body movement as part of the game mechanic feel more limited, but so far my favorite moments haven’t suffered. I can’t imagine playing some of these games in a pure standing mode though. Being able to pace around a bit adds a lot of immersion, even if it’s not directly directly affecting the game.

Immersion and Isolation: It’s easy to look at 2D renderings of the games and not see how different the experience is from playing a first person 3D game. I feel that I have been to the places these games take place. The full head tracking adds a sense of presence that I haven’t gotten from a 3D game since the 90′s. The flip side is that when I put the headset on, I’ve shut out the world. After many years of not really playing video games, this is the first time my wife has ever seen me disconnect from reality for a video game, and I suspect it is in a much more literal sense than normal. I’m not actually there, which is at the same time amazing and troubling. The term VR widow has been brought up a few times, so it’s something to manage.

Tinkering: I’ve installed LibreVR/Revive and have gotten WebVR and AFrame running in my rig. As a result I can play some games intended for the Oculus Rift pretty seamlessly and do easy HTML-like development to build my own VR scenes.

Great game experiences so far: At launch, many reviewers were underwhelmed with the launch titles for the Vive and the high prices being asked on Steam for less than fully thought out experiences. Here are some of the early VR experiences I’ve loved:

The Lab: The most solid teleportation mechanic. The archery game and calibration game (angry birds clone) are great experiences when you are first getting your “VR legs”. I still think the archery game in the Lab is the most “game” like full immersion I’ve gotten thus far for a twitch muscle game experience in VR.

Minecraft: I’m using the community Vive mod, which I hear is stronger than the official Oculus support. Building something in Minecraft is an entirely amplified experience when you can walk around your creation. If you are a fan of the voxel building genre you owe it to yourself to try this in VR.

Job Simulator: Solidly built. The office level is cute. I suspect this game doesn’t have a lot of replay-ability and as a result I’m playing it slowly.

Hot Dogs, Horseshoes & Hand Grenades (H3VR): I highly recommend this to anyone who has ever had fun going to a gun range. It’s a paper target only (there are some robots too) gun range simulator. The main game mechanic is actually having to combat-reload your weapons. It’s proof that VR has a potential for extending existing genres (like gun games) with new levels of realism and interactivity. It’s early access so there are no in game tutorials. If you are going to play this, you owe it to yourself to watch the 30 minute tutorial from the developer.

Adventure Time: Magic Man’s Head Games: This is an Oculus game that plays just fine (if not better with the ability to walk around with the chaperone) on a Vive. It is a short game, with only two levels so far, but the game quality is very high. I’m excited to see more platformers with a “god view” 3rd person camera come out in VR. This was really fun.

Budget Cuts (Demo): a seriously impressive free demo. There are paid launch games that are not this well done. Getting chased by a robot down twisting hallways was pretty disorienting with the teleport mechanic. The nuances of the two step teleport activation are important here as it adds gameplay depth but will add much more adjustment time to how our brains navigate maps.

House of the Dying Sun: I’m only a few levels into this, but it’s been interesting. The flight sim and space flight sim genres have huge potential for me, so I’m excited to try more. I am worried however that too many of them will be “space trucker” games requiring more hours than I really want to remove myself from reality. Bring on a full TIE fighter port, FTLoG.