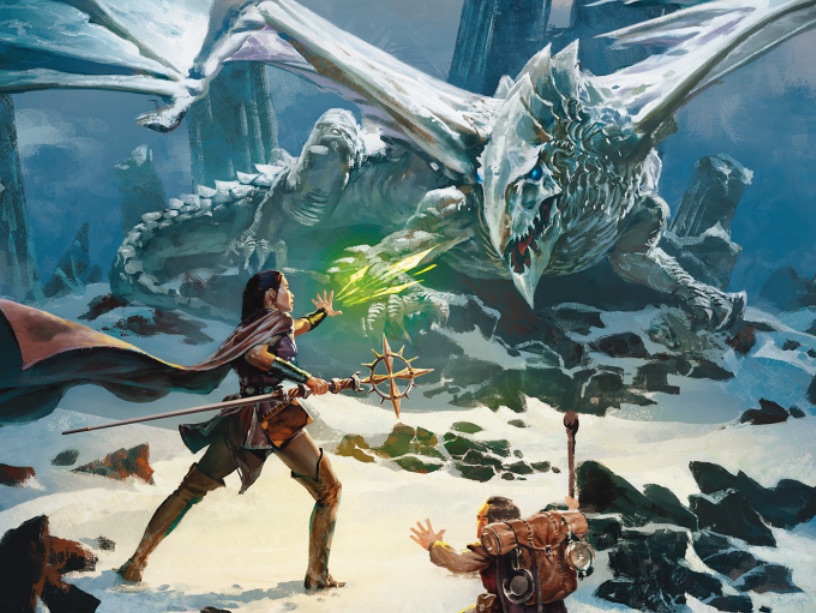 Spoilers ahead for Dragon of Icespire Peak, the module inside the D&D Essentials Kit.

I recently finished my first Adventurer’s League experience running the Dragon of Icespire Peak for patrons of my friendly local gaming store. It took six sessions of three hours each to clear the module and defeat the white dragon on the front cover of the boxed Essentials Kit. I had a blast. Adding another game to my D&D calendar was a big commitment of time, but after the fun of this experience, I’m going to keep it going.

The module follows a common trend for tier 1 play by having adventurers pick up quests from a quest board. This story mechanic is a big boon to Adventurer’s League play as it helps spring the players into encounters without using up precious table time for the tiring “you meet in an inn” introduction scenes. However, this mechanic does have the downside of making D&D feel like an MMO RPG with passive World of Warcraft quest givers. To combat this, make sure you mix in something to your game that video games can’t provide whether it be allowing creative solutions to encounters or having the world react more directly to the consequences of the player’s actions and adventure outcomes. 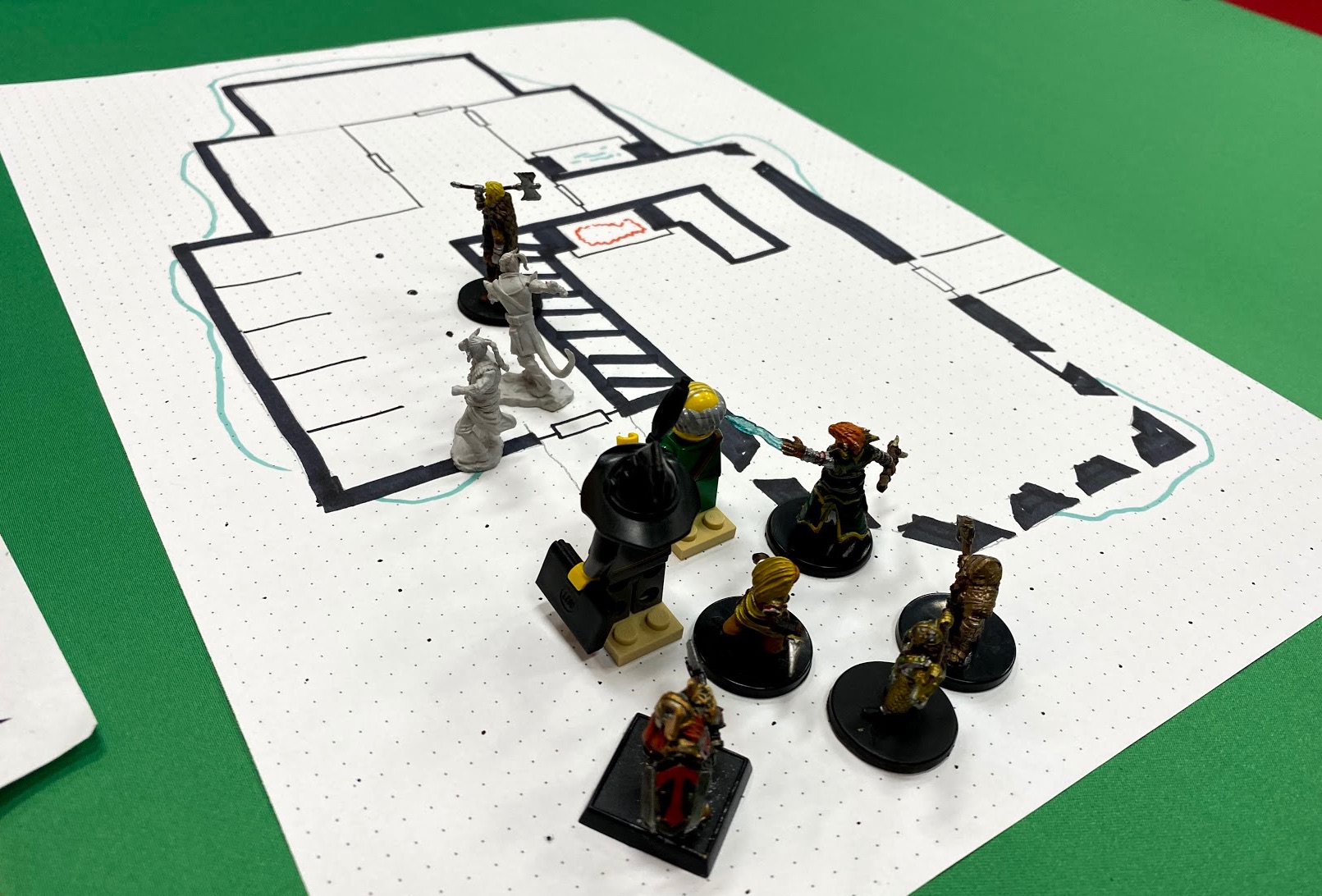 Adventurer’s League play pacing can be different from a hardback. Dragon of Icespire peak uses traditional XP advancement, but Season 9 of Adventurer’s League often carries the expectation much quicker leveling, as fast as a level every two to four hours. When the players hit level 6, they will be ready to fight the Dragon and that means you won’t get to all the main quests or side quests. You may need to retire adventures and have the real-world consequences of their monsters being left alone reach the players’ ears. This should motivate them more when it comes time to take on big foes like the Anchorites of Talos or Cyrovain at the end of the adventure.

Gorthok the Thunder Boar, a custom paint of a plastic boar toy to represent the Huge primal nature spirit

I often found myself with 45 minutes of table time left, which is enough for an encounter but not enough to handle another full quest. I used these moments to encourage role-play or have the party attacked by a patroling Cryovain. At my game table, we completed the adventure in 6 sittings of 3 hours each. We finished seven out of fourteen mini-adventures and got two preview skirmishes with Cryovain.

Adventurer’s League allows up to seven PCs at a table. If you allow that number of signups and there is a high demand for D&D in your area, you will find yourself running for a full table and you need to prepare. In 5th Edition D&D, the action economy works against monsters. Dragon of Icepsire peak seems written so that it can scale down to small table sizes and has no guidance on how to scale the adventure up for large tables. Here are some tips I find useful:

Have an efficient way of handling initiative. I use dry-erase note cards tents with the characters’ names. At the start of the game, I make sure to collect their names, AC, and passive perception stats. Upon the start of combat, I ask for initiative from left to write as the cards are ordered on the table and jot the number on the back of the cards. I then can quickly sort without having to keep anything in my head. During combat, I move a visible token from my right to left on the cards to indicate who’s turn it is. 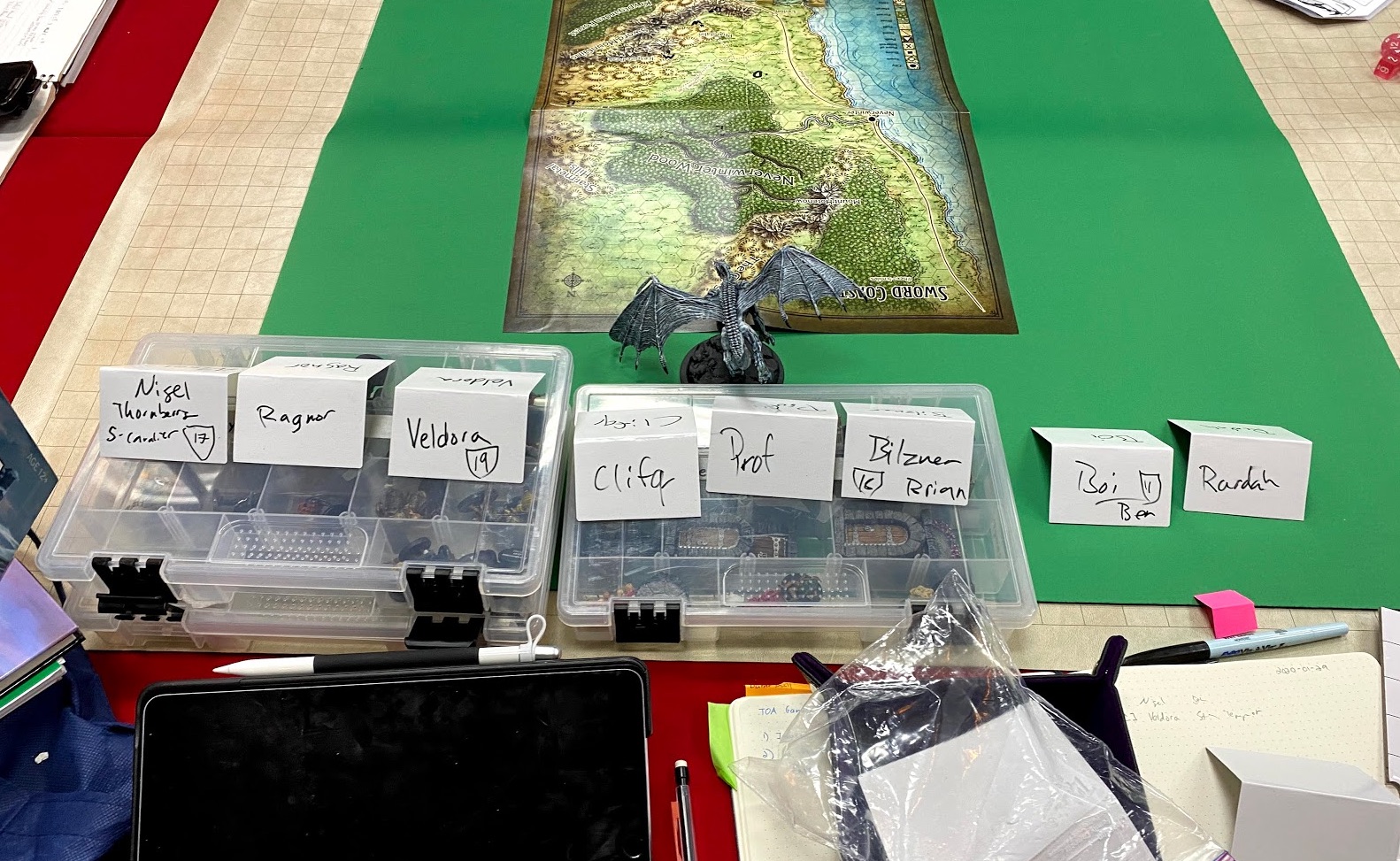 For adventurer’s League, I purposely make attempts to split the party into two fronts during a combat to stop them from concentrating their damage. I’ll have monsters attack from both sides of a tunnel. I’d rather the players activate all encounters in a dungeon at the same time, having monsters pouring out of various dungeon rooms to attack from all sides than have the players clear easy encounters one by one. Easy encounters at seven players are no fun. Seven cantrip blasts in a row will clear rooms and may even leave the low initiative characters feeling like they are not contributing. Involve everyone by attacking the party marching order from all sides.

Seven strangers playing D&D means the party won’t have a way to make critical decisions. Which quest to start? Sparing a monster from execution? The debate is fun, but cut it off at a time limit and have the players do a straight vote. You’ll save time and stop the loudest players from dominating decision making.

The ecounters in this module are a bit bland. I’ll be honest, Axeholm and Mountain’s Toe Gold mine are weak points of this adventure. They involve clearing out large, underpopulated dungeons of single monster types. This means players will fight two or three almost identical encounters in a single session, adding no variety or challenge progression. Strict Adventurer League does not let a GM throw in additional quest rewards or magic items, but no one is going to blink or complain if you make the monsters more interesting. 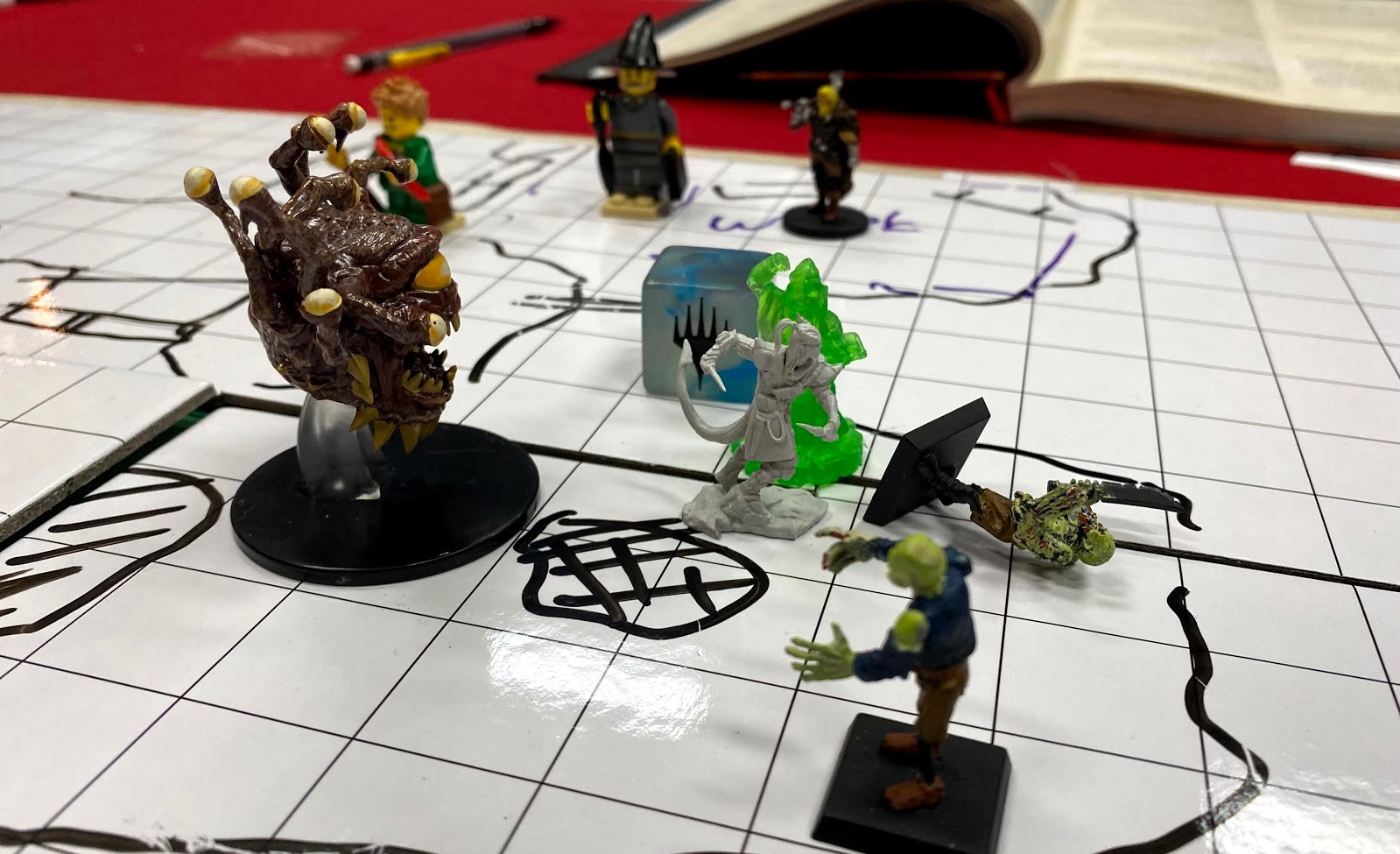 Surprise! A Beholder Zombie in Dragon of Icespire Peak

In my game, when the players decided to go to Mountain’s Toe, I decided the mine was overrun by a virulent plague of undeath. Fighting their way through the first encounter with zombies and skeletons, the players see clues of half and fully disintegrated miners foreshadowing something more powerful lurks inside the dungeon. The turn a corner to find themselves in a close-quarters fight with a Beholder Zombie. The miners dug too deep!

I don’t know how much a DM is strictly allowed to substitute monsters in Adventurer’s League. I found it essential to keep the slow parts of the hardback module interesting and to surprise players who had already read the module, which frankly was several of them.

Cryovain is a young white dragon, a CR 6 monster. White dragons are often regarded as the least effective dragon out of those listed in the Monster Manual. By the sixth level, he is likely too easy for your party. This means that you need to either boost his difficulty or slow the progression of the party to make Cryovain a challenging and fun boss fight. You can boost his challenge by increasing his damage, hitpoints, and saves to be somewhere between the young and adult dragon stats. Strongly consider giving him legendary actions if your players are demonstrating sound tactics. He’ll need all the action economy he can get to stop from being smashed. 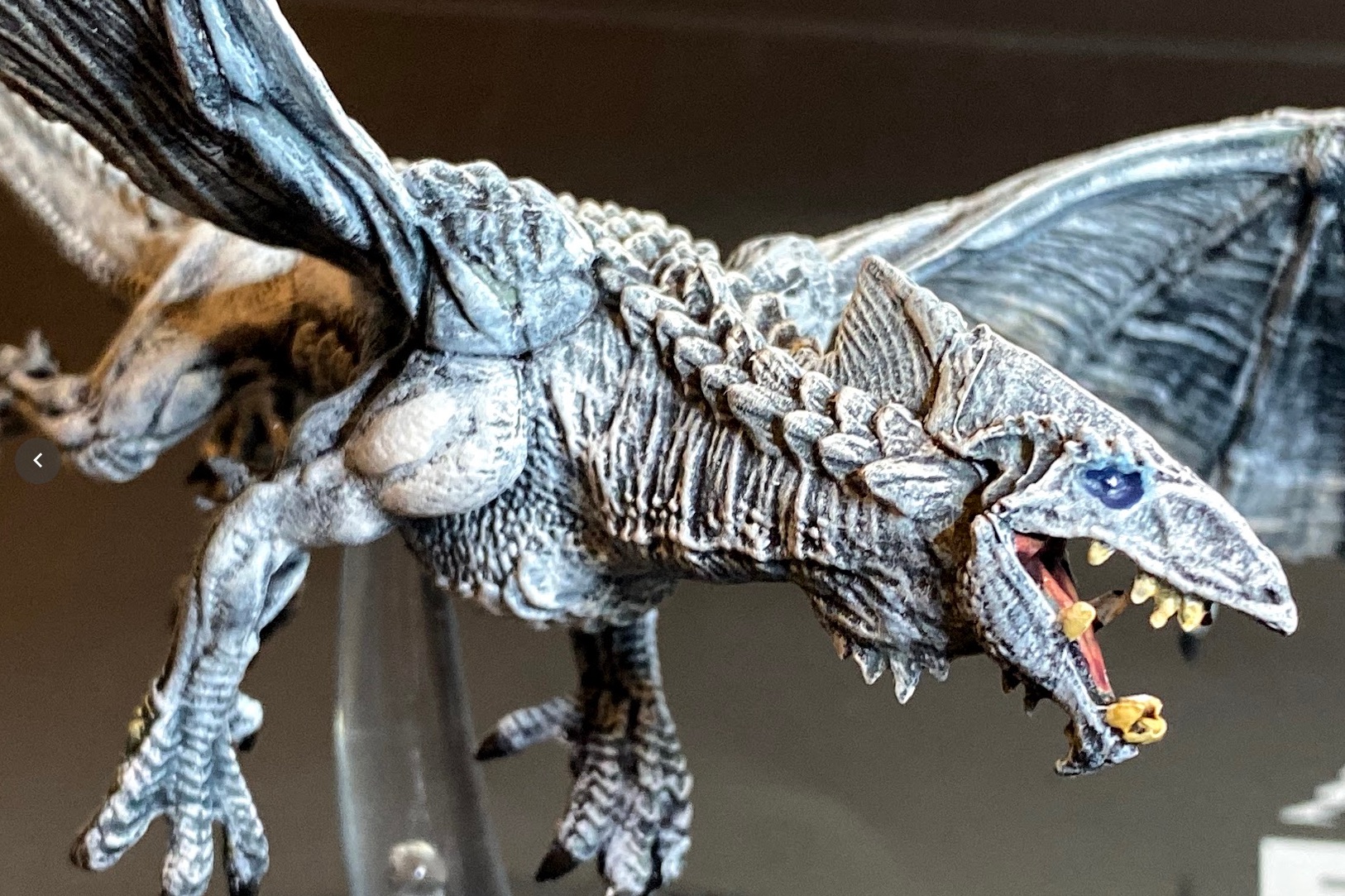 If I'm going to run a six-part module, I'm definitely going to paint a mini of the final boss

Experienced and knowledgeable D&D players will know that Cryovain is a lair monster and more dangerous when encountered in his lair and will try to draw him out for the final fight. This is good! If the players are successful you’ll need to have decided what this means for the final encounter. Will there be an opportunity to soften up the players with resource-draining encounters first or will you let the players tackle Cryovain after a long rest? Reward smart play, but do what you can to keep things as challenging. Cryovain is the big boss afterall.

My Players Crushed Him

I think my players had fun, but I know that I messed up a single detail about the dragon that robbed him of any chance challenging the players. Cryovain has a fly speed of 80, but I mistakingly read it as 40 when starting the fight. Even dashing, he had trouble maneuvering around the board and took more ranged attacks getting into breath weapon range and retreating than he should have had to. 80 feet of movement is enough to get out the range of most spells when retreating. My players played smart, rolled criticals, and took one devastating breath attack which almost floored PCs. It’s a lesson learned for me, but we all had fun. 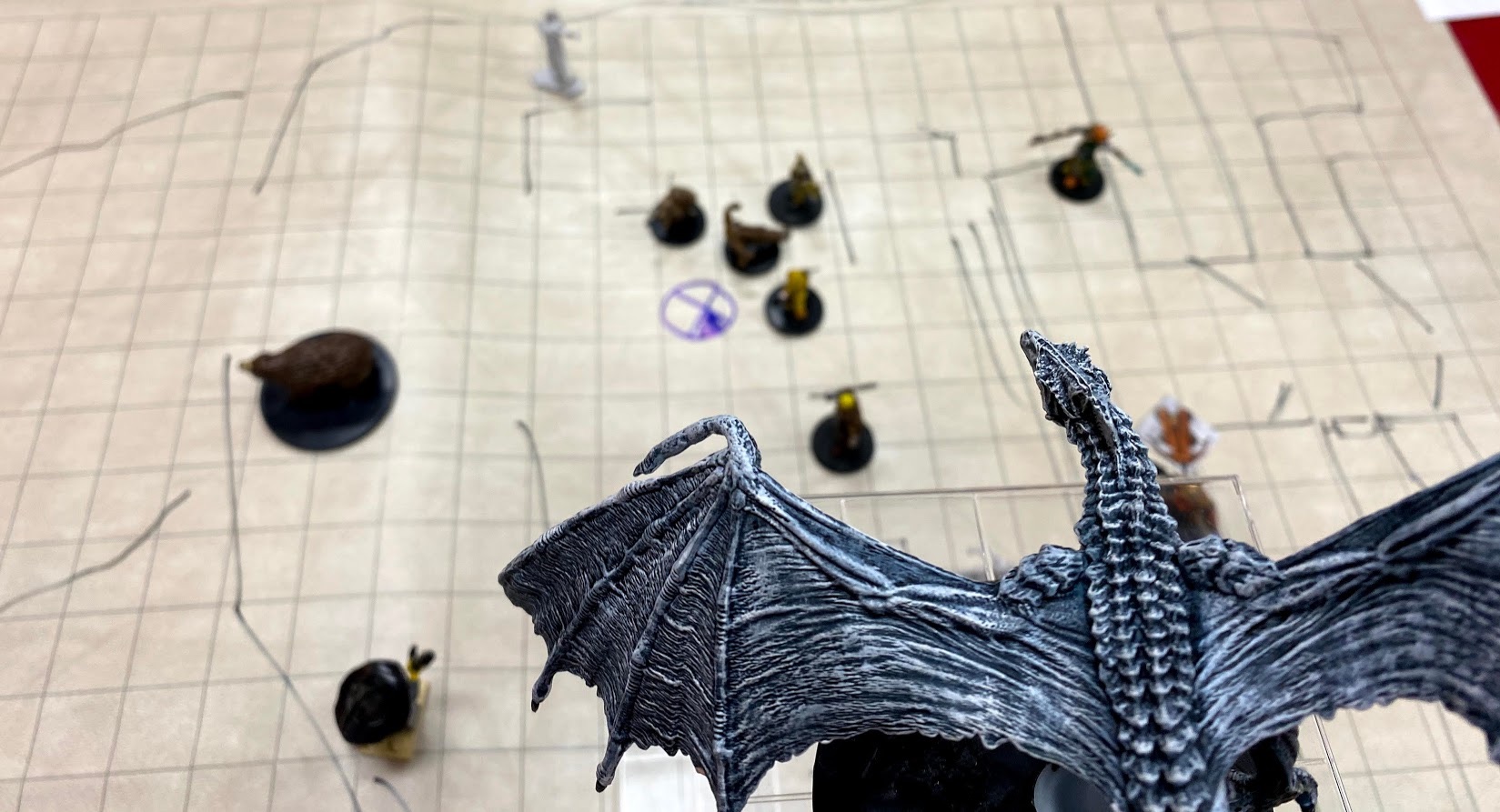 Cryovain attacks from the air

Dragon of Icespire Peak is likely to be a common Tier 1 adventure until Wizards releases another generic starter kit full of mini-adventures. I recommend it for new DMs learning how more about Adventurer’s League play and balancing encounters. A big draw that I have not mentioned is that compared to other hardback content, Dragon of Icespire Peak doesn’t require as much commitment for players at only six sittings. You’ll likely find you want to change things and plan for the dragon fight, but I recommend the module even run as written. If you are luckly You’ll find your party surprises you with their creative solutions to problems the way mine did, which is one of the big draws I was hoping for branching out to game with players other than my close friends in my home game.